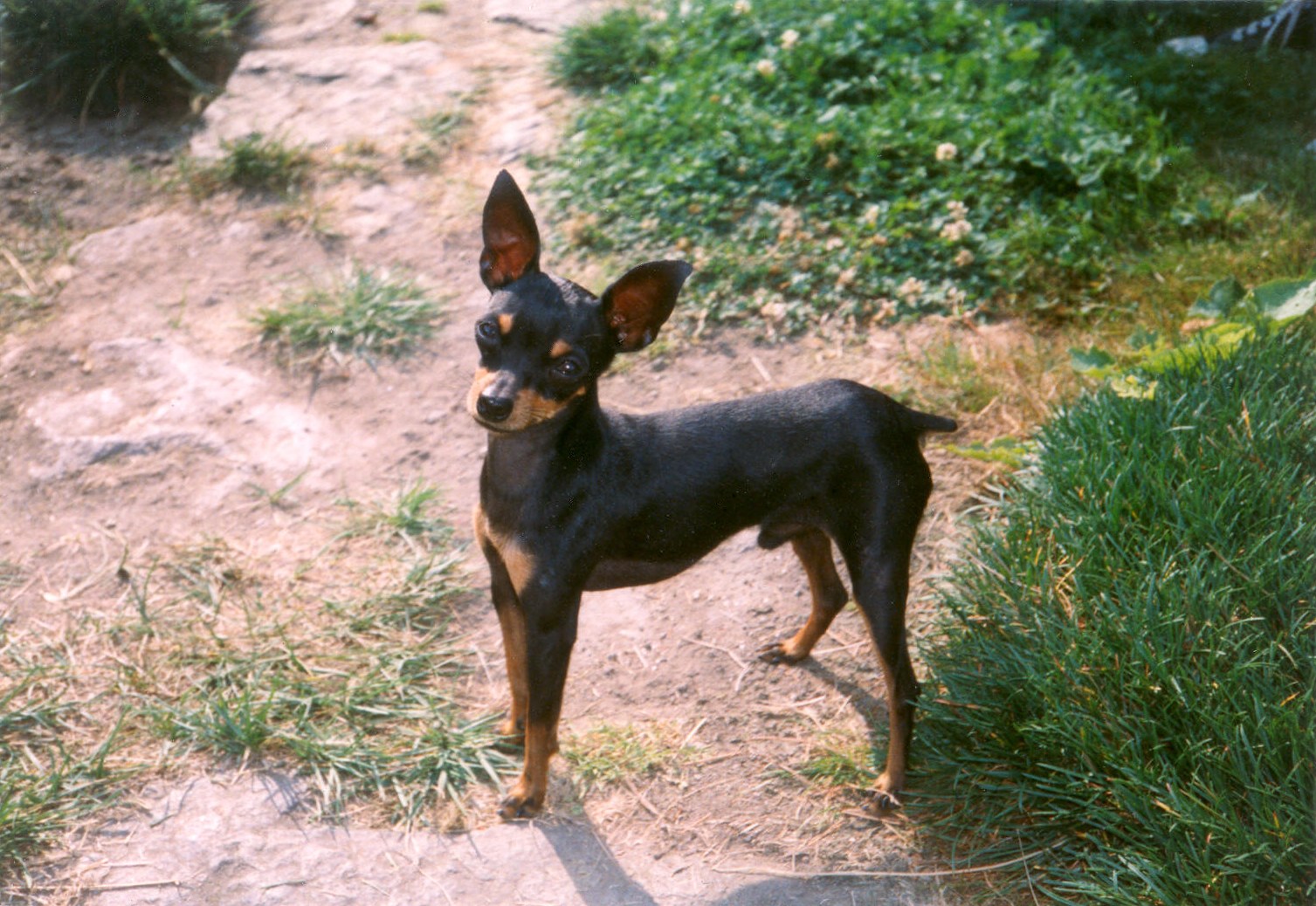 Brief historical summeray:
Historically, this breed has been known since the remote past of the Czech state. Because of its small size, quick movement and highly developed sense of smell it was used for killing rats (which gave it the name "Krysařík" = Ratter). This quality was gained during its long historical development. This small active dog was often seen at aristocratic feasts of Czech kings at the Prague castle. It adorned courts of Bohemian aristocracy and as a gift from Bohemian kings it came to other European rulers and later to the ordinary citizens. The search of historical facts resulted in proofs that this breed really is of Bohemian origin and can be traced to the early history of the Czech nation. In 1980 its regeneration successfully started. Pražský krysařík is again a favourite pet that lives as a family dog and is becoming popular also in many other countries worldwide.

General appearance:
A small smooth-haired or medium long coated dog with an almost square and compact body. Despite its small size it is a very active, alert and lively dog. Sexual dimorphism should be clearly defined.

Important proportions:
Relation of height at withers to length of body (measured from point of shoulder to point of buttocks) should be 1:1.05. Females may be slightly longer.

Depth of chest should be in ideal case half of height at withers. Skull width should be identical to skull length. The skull must not be wider than longer. Muzzle should be one third up to less than one half of the total length of the head with distinct stop. These proportions should be considered as ideal ones, but the general appearance is more important.

Behaviour / temperament:
Gentle, curious and affectionate. Quick with good movement and steady pace. By nature slightly reserved towards strangers but very friendly in the family. With natural nobility and character.

Ears: Set at the back of the head, triangular, firm, naturally erected, carried in a gentle angle to the sides.

Neck: Neck without folds, gracefully curved and sufficiently long, at correct angle to body and head.

Tail:
Set at the level of back, sporadically docked in country of origin. If not docked, it should reach no further than the hock joint. Firm tail, it gets narrower to the tip. The tail is straight half way up and carried slightly upright. When the dog moves it is carried higher, it can be curved over the back in a semicircle.

Limbs
Forequarters:
General appearance: Viewed from the front, straight and parallel legs, they should not stand too wide.
Shoulder: Muscular, laid back and close to the chest.
Upperarm: Straight, muscular
Elbow: Close to body and straight. Turned neither in nor out.
Forearm: Adequately strong, straight.
Metacarpus (Pastern): Viewed from the front, a fluent continuing of forearm. Viewed from the side slightly inclined, strong.
Forefeet: Round, firm, with well arched, tight toes, nails dark.

Gait / movement:
Balanced angulations in front and rear will produce steady, flowing, parallel, light movement. Pads must not drag along. Trot should be ground covering.

Skin:
Skin is tough, strong, firm and fits tight to body. Pigment according to the colour of the coat.

Coat:
Hair: 1) Short, glossy, fitting close to body, thick, without bald places. Head is usually coated with thinner and shorter coat than the body. 2) Moderately long, fringes on ears, quarters, tail and slightly longer on the chest. Colour: Black, brown or blue with tan-markings including their dilutioned variations (in any shade, from very pale to very rich). Yellow recessive colour (with pale pigmentation) and red in most rich shades. These are without tan-markings. Black and tan merle and brown and tan merle. Tan-markings are preferably a deep reddish tan, except in the blue varieties where it is paler according to the genetic make-up. Tan-markings are found above the eyes, on cheeks, on chest and on the pasterns and feet, also at inner side of the hindquarters and under the root of the tail. On the fore chest it forms two similar and separated triangles. Pigmentation on nose, eye- and lip-rims are according to coat-colour, but deeper pigmentation is preferred.

Faults:
Any departure from the foregoing points should be considered a fault and the seriousness with which the fault should be regarded should be in exact proportion to its degree and its effect upon the health and welfare of the dog.