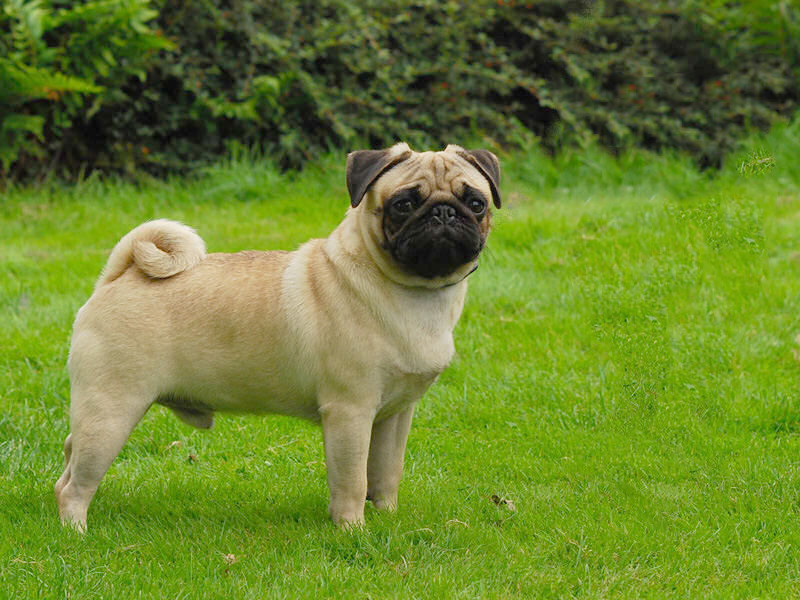 Brief historical summary: A certain amount of speculation has taken place regarding the origin of this breed, which would seem to have come from the Orient. His home country is listed as China, where snub-nosed dogs have always been in favour. He found his way to Europe with traders of the Dutch East India Company and as far back as the 1500s was being admired in the Netherlands. In fact, the Pug became the symbol for the royal patriots.
The Pug arrived in England when William III came to the throne. Until 1877 the breed was seen here only in fawn but in that year a black pair was introduced from the Orient.
General appearance: Decidedly square and cobby, it is “multum in parvo” shown in compactness of form, well knit proportions and hardness of muscle, but never to appear low on legs, nor lean and leggy.
Important proportions: Decidedly square and cobby.
Behaviour and temperament: Great charm, dignity and intelligence. Even-tempered, happy and lively disposition.
Head Relatively large and in proportion to body, round, not apple-headed.
Cranial region:
Skull: With no indentation. Wrinkles on forehead clearly defined without exaggeration.
Facial region:
Nose: Black with fairly large well opened nostrils. Pinched nostrils and heavy over nose wrinkle is unacceptable and should be heavily penalised.
Muzzle: Relatively short, blunt, square, not upfaced. Eyes or nose never adversely affected or obscured by over nose wrinkle.
Jaws / Teeth: Slightly undershot. Wide lower jaw with incisors almost in a straight line. Wry mouth, teeth or tongue showing all highly undesirable and should be heavily penalised.
Eyes: Dark, relatively large, round in shape, soft and solicitous in expression, very lustrous, and when excited, full of fire. Never protruding, exaggerated or showing white when looking straight ahead. Free from obvious eye problems.
Ears: Thin, small, soft like black velvet. Two kinds – “Rose ear” - small drop-ear which folds over and back to reveal the burr. “Button ear” - ear flap folding forward, tip lying close to skull to cover opening. Preference given to latter.
Neck: Slightly arched to resemble a crest, strong, thick with enough length to carry head proudly.
Body: Short and cobby.
Topline: Level, neither roached nor dipping.
Chest: Broad in chest. Ribs well sprung and carried well back.
Tail: High-set, tightly curled over hip. Double curl highly desirable.