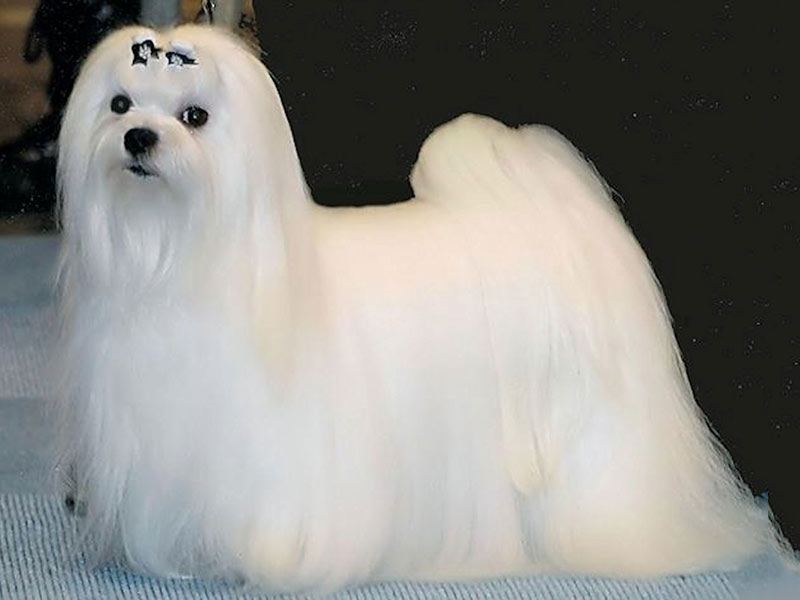 Brief historical summary : His name does not signify that he originates from the island of Malta, because the adjective « Maltese » comes from the Semitic word « màlat » which means refuge or harbour; this Semitic root comes up again in a whole series of names of maritime places; i.e. in the name Adriatic island of Méléda, the Sicilian town of Melita and also in that of the island Malta. The ancestors of this little dog lived in the ports and maritime cities of central Mediterranean, where they hunted mice and rats which were found in profusion in the harbour warehouses and in the hold of ships. In his list of dogs existing at the time of Aristote (384 322 B.C.) he mentions a breed of little dogs to which he attributes the Latin name « canes melitenses ». That dog was known in Ancient Rome : favourite companion of the matrons, has been praised by Strabon, Latin poet of the first century A.D. Representations of the Maltese by numerous Renaissance painters show this little dog in the salons of the period at the side of beautiful ladies of the time.
General appearance : Of small size, longish body. Covered by a very long white coat, very elegant with a proud and distinguished head carriage.
Important proportions : Length of body exceeds by about 38% the height at the withers. The length of the head is equal to 6/11 of the height at withers.
Behaviour / temperament : Lively, affectionate, very docile and very intelligent.
Head : Its length is equal to 6/11 of the height at the withers. It is rather wide exceeding slightly half of the length.
Cranial region :
Skull : The skull is slightly longer than the muzzle; the bizygomatic width is equal to its length and consequently superior to the half of the length of the head. In the sagittal direction, it is very slightly egg-shaped (ovoid); the upper part of the skull is flat, with an occipital crest very slightly marked; the protuberance of the frontal bones and the supraorbital ridges are well developed; the frontal indentation of the furrow is so lightly marked, that is invisible; the lateral faces of the parietal bones are somewhat convex.
Stop : Frontal-nasal depression strongly defined making an angle of 90°.
Facial Region :
Nose : In the prolongation of the nasal bridge; seen in profile, its forepart is vertical. Voluminous with open nostrils, rounded and absolutely black.
Muzzle : Length of muzzle is equal to 4/11 of the length of the head; it is therefore slightly less than its half. The suborbital region is well chiselled. Its depth is a good 20% less than its length. The sides of the muzzle are parallel, but the muzzle seen from the front, must not appear square, since its anterior face joins onto the lateral sides by curves. The muzzle is rectilinear with a well marked furrow in its central part.
Lips : Viewed from the front, the upper lips, at their junction, have the shape of a very open arch. They are little developed in depth and the labial commissure is not visible. The upper lips adapt perfectly to the lower lips, in such a way that the bottom profile of the muzzle is defined by the lower jaw. The edges of the lips must be absolutely black.
Jaws : Normally developed and light in appearance, perfectly adapted. The lower jaw, with its branches being straight, is neither prominent nor receeding in its anterior part.
Teeth : The dental arches are perfectly adapted and the incisors in scissor articulation. Teeth are white; the dentition is well developed and complete.
Eyes : Open, with lively and attentive expression, larger than would be expected; the shape tends to be round. The eyelids are in close contact with the eyeball, which is never deep-set, but rather level with the head, just slightly protruding. The eyes are set on a same almost frontal plan. Seen from the front, they must not show sclera (white of the eyes); they are of a dark ochre colour; eye rims are black.
Ears : Of almost triangular shape, their width is about 1/3 of their length. They are set high above the zygomatic arch, hanging close to the sides of the skull; with little erection.
Neck : Although covered with an abundant coat, the demarcation of the nape of the neck is obvious. The upper profile is arched. Its length is about half of the height at the withers. It is carried erect and does not show any loose skin.
Body : The length from the point of the shoulder to the point of the buttock is 38% more than the height of the withers.
Top line : Straight to the tail-set.
Withers : Slightly raised above the topline.
Back : Its length is about 65 % of the height at the withers.
Croup : In the prolongation of the lumbar-dorsal line, the croup is very wide and long; its obliqueness is 10° below the horizontal.
Chest : Ample; let down lower than the level of the elbows, with ribs not too well sprung. The circumference of the chest is 2/3 more than the height at the withers. Sternal region very long.
Tail : Set on level with the croup, thick at the root and fine at the tip. Its length corresponds to about 60% of the height at the withers. Forms a single big curve, the tip of which falls between the haunches touching the croup. A tail curved to one side of the body is tolerated.

Limbs
Forequarters :
General appearance : On the whole they are close to the body, the legs standing straight and parallel.
Shoulder : Its length represents 1/3 of the height of the withers and its obliqueness below the horizontal is of 60° to 65°. In relation to the median plane of the body nearly vertical.
Upper arm : Longer than the shoulder, measures 40 to 45% of the height at the withers, the obliqueness below the horizontal is of 70°. Well joined to the body in its top 2/3, and its longitudinal direction is almost parallel to the median plane of the body.
Elbows : Parallel to the median plane of the body.
Forearm : Lean with few visible muscles, but with a rather sturdy bone structure in relation to the size of the breed.
Pastern joint : In the vertical line of the forearm, mobile; should not be knotty; covered with a fine skin.
Pastern : Has the same characteristics as the carpus and, because of its short length, is vertical.
Forefeet : Round, toes closed and arched; communal and digital pads should be black, the nails should be also black or at least of a dark colour.
Hindquarters :
General appearance : On the whole, of sturdy bone structure; parallel and, seen from behind, vertical from the point of the buttock to the ground.
Upper thigh : Hard muscled, hind edge is convex. Parallel to the median plane of the body, its downward and forward direction is somewhat oblique in relation to the vertical. Its length is nearly 40% of the height at the withers and its width is a little less than its length.
Lower thigh : With a groove between the tendon and the bone hardly noticeable; its obliqueness below the horizontal is 55°. It is slightly longer than the thigh.
Hock joint : The forward angulation of the hock is 140°.
Hock : The distance from the ground to the point of the hock is slightly more than 1/3 of the height at the withers. Its length corresponds to the height of the hock. It is perfectly upright.
Hind feet : Round as the forefeet, with all the same characteristics.
Gait / movement : Even, skimming the ground, free, with short and very quick steps at the trot.
Skin : Really tight to all parts of the body, pigmented with dark patches and patches of a reddish wine colour, especially on the back. The rim of the eyelids, third eyelids and lips are black.
Coat
Hair : Dense, shiny, glossy - falling heavily and of a silky texture, very long on the whole of the body and straight throughout its length without traces of waves or curls. On the trunk it should be longer than the height at the withers and fall heavily back to the ground like a cape fitting close to the trunk without opening or forming tufts or flocks. Tufts or flocks are acceptable on the forequarters from the elbow to the foot, and on the hindquarters, from the stifle to the foot. There is no undercoat. On the head the coat is very long, as much on the foreface, where it mingles with the beard, also on the skull where it falls eventually mingling with the hair covering the ears. On the tail, the hairs fall back to one side of the body, i.e. on the flank and on the thigh, of such length as to reach the hock.
Colour : Pure white; a pale ivory tinge is permitted. Traces of pale orange shades are tolerated but not desirable and constitute an imperfection.
Size and weight :
Height at the withers : Males from 21 to 25 cm.
Females from 20 to 23 cm.
Weight : 3 to 4 kg.
Faults : Any departure from the foregoing points should be considered a fault and the seriousness with which the fault should be regarded should be in exact proportion to its degree and its effect upon the health and welfare of the dog.