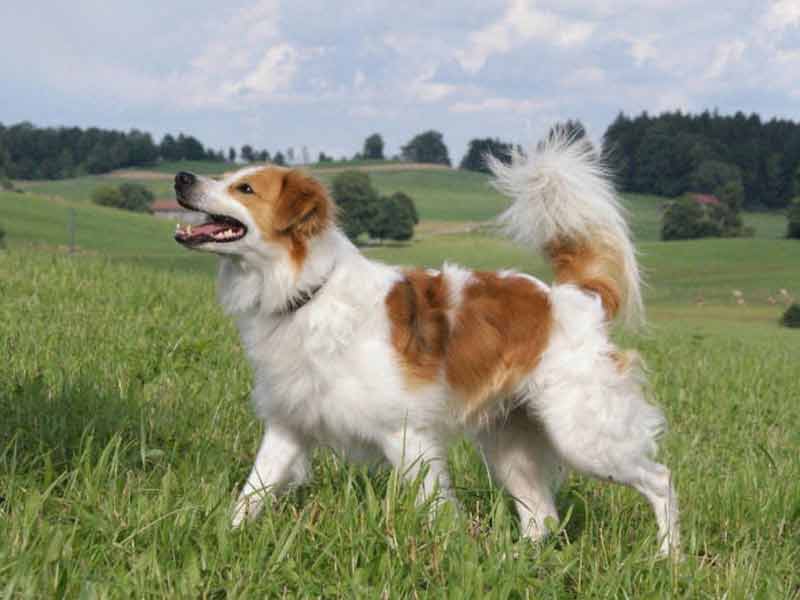 Brief historical summary : The Kromfohrländer is one of the most recent German breeds and has been recognized internationally since 1955. Ilse Schleifenbaum who first bred it, lived near Siegen in southern Nordrhein-Westphalia near the district "krom Fohr" (in modern German « crooked furrow »), hence the name « Kromfohrländer ». The breed ows its lovable temperament and character to its ancestors, the wire-haired Fox Terrier and the Grand Griffon Vendeen.
General appearance : Medium size. There are two separate varieties, distinguished by coat type :

Colour :
On body : Basic colour white with light brown, tan to very dark brown markings in shape of variously large patches or saddle. With a brown undercoat the tips of hairs may be black.
On head : Light brown, tan to very dark brown markings on cheeks, above eyes and on ears ; divided as symmetrically as possible by a white blaze which reaches up to the forehead or to the nape of neck without any interruption ( symmetrical mask with blaze).
Height and weight :
Height at withers : Between 38 and 46 cm.
Weight : For males from 11 to 16 kg, for females from 9 to 14 kg.
Faults : Any departure from the foregoing points should be considered a fault and the seriousness with which the fault should be regarded should be in exact proportion to its degree and its effect upon the health and welfare of the dog.
Serious faults :

Note : A singular missing incisor in the upper or lower jaw as well as a somewhat shorter or longer coat should not be considered an eliminating fault if the dog, in all other parts, is qualified as excellent or very good.
N.B.: