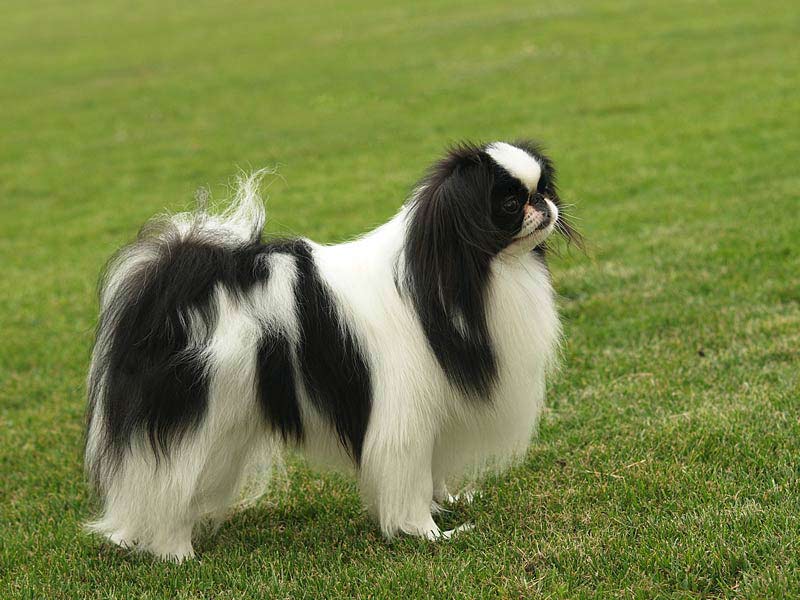 Brief historical summary : According to ancient documents it is assumed that the ancestors of the Chin were presented as a gift from the rulers of Korea (during the Silla Dynasty age 377-935) to the Japanese court in 732. For a successive 100 years, there appears to have been a large number of Chins coming into Japan. Historical records also indicate that envoys sent to China (during the Tung Dynasty age 618-910) and North Korea (during the Po H’ai Dynasty age 698-926) brought back dogs of this breed directly. During the reign of the Shogunate Tsunayoshi Tokugawa (1680-1709) the breed was raised as an indoor toy dog in the Castle of Edo. In 1613 a Britisher, Captain Searles, brought a Chin to England and in 1853 Commodore Perry from the U.S. brought several to the U.S. of which two were presented to Queen Victoria of England. Since 1868, the Chin has been favored as a lapdog by ladies of the upper classes, and currently is being widely spread as a companion dog.
General appearance : Small sized dog with broad face, covered with profuse coat, with elegant and graceful figure.
Important proportions : The ratio of height at withers to length of the body is equal. The body of bitches slightly longer.
Behaviour / temperament : Clever, mild and lovely.
Head
Cranial region:
Skull : Broad and rounded.
Stop : Deep and indented.
Facial region:
Nose : Nasal bridge very short and wide, the nose on a straight line with the eyes; the nose colour black or deep flesh colour, according to dog’s markings. Well opened nostrils.
Jaws/Teeth : Teeth white and strong; level bite desirable, but scissor bite or undershot mouth permitted.
Eyes : Large, round, set wide apart and lustrous black in colour.
Ears : Long, triangular, hanging, covered with long hair; set wide apart.
Neck : Rather short, and held high.
Body :
Back : Short and straight.
Loin : Broad and slightly round.
Chest : Moderately broad and deep, with ribs moderately sprung.
Belly : Well drawn up.
Tail : Covered with beautiful, profuse and long hair, being carried up over back.

Limbs
Forequarters : Forearms straight, fine boned; backside of forearms below the elbows feathered.
Hindquarters : Hindlegs moderately angulated, rear of the rump covered with feather.
FEET : Small and hare-shaped, covered with tufts desirable.
Gait / movement : Elegant, light and proud.
Coat
Hair : Silky, straight and long. Whole body except face covered with profuse hair. The ears, neck, thighs and tail have profuse feather.
Colour : White with markings of black or red. Markings symmetrically distributed from around eyes over ears as on whole body desirable. Especially white and wide blaze from muzzle to crown desirable.
Size : Height at withers : Dogs approximately 25 cm. Bitches slightly smaller than dogs.
Faults : Any departure from the foregoing points should be considered a fault and the seriousness with which the fault should be regarded should be in exact proportion to its degree and its effect upon the health and welfare of the dog.