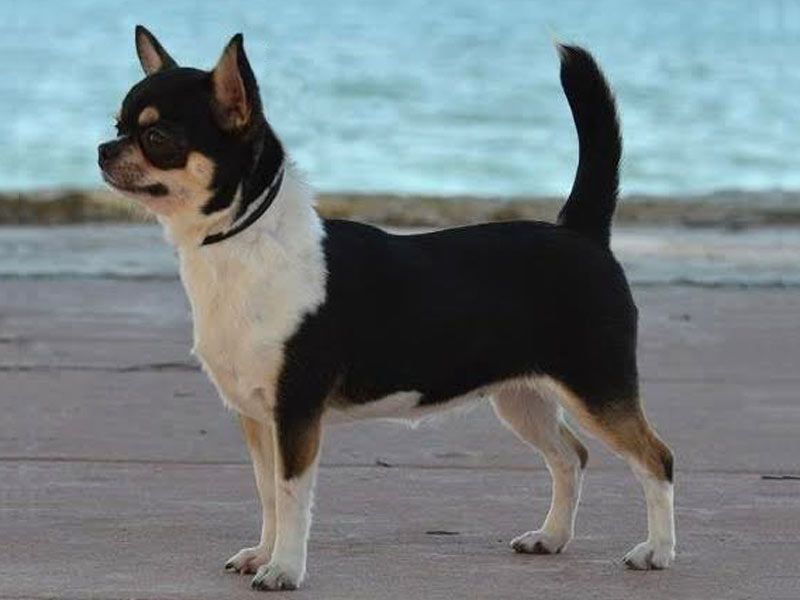 Brief historical summary : The Chihuahua is regarded as the smallest pedigree dog in the world and carries the name of the largest state of the Mexican Republic (Chihuahua). One assumes that these dogs used to live in the wild and, at the time of the Toltec civilization, were captured and domesticated by the natives. Representations of a Toy dog called « Techichi » which lived in Tula, were used as decorations on town architecture. These statues
are very similar to the present day Chihuahua.
General appearance : This dog has a compact body. Of great importance is the fact that his skull is apple-shaped and that he carries his moderately long tail very high, either curved or forming the shape of a semicircle with the tip pointing towards the loin region.
Important proportions : Length of body slightly greater than height at withers. Desired, however, is an almost square body, especially in males. In bitches, because of the function of reproduction, a slightly longer body is permitted.
Behaviour / temperament : Quick, alert, lively and very courageous.
Head
Cranial region :
Skull : Well rounded apple head (a characteristic of the breed).
Stop : Well marked, deep and broad as the forehead is rounded above the set-on of muzzle.
Facial region :
Nose : Any colour permitted. Moderately short, pointing slightly upwards.
Muzzle : Short, straight seen from side, broad at set-on, tapering towards the tip.
Lips : Lean and close fitting.
Cheeks : Only slightly developed, very clean.
Jaws/Teeth : Scissor or pincer bite. Overshot, undershot, as well as any other anomaly in position of upper or lower jaw must be strictly penalized.
Eyes : Large, roundish in shape, very expressive, not protruding, perfectly dark. Light eyes permissible, but not desired.
Ears : Large, upright, widely open, broad at set-on, gradually tapering towards their slightly rounded tip. In repose inclined laterally forming an angle of 45°.
Neck : Upper profile slightly arched. Medium length. Thicker in dogs than in bitches. Without dewlap. In the long-haired variety, the presence of a neck-ruff with longer hair is highly desirable.
Body : Compact and well built.
Topline : Level.
Withers : Only slightly marked.
Back : Short and firm.
Loin : Strongly muscled.
Croup : Broad and strong; almost flat or slightly sloping.
Chest : Ribcage broad and deep, ribs well sprung. Seen from front, roomy but not exaggerated. Seen from side, reaching to elbows. Not barrel shaped.
Underline and belly : Formed by a clearly tucked up belly. Slack belly is permitted but not desired.
Tail : Set on high, flat in appearance, of moderate length; broad at root, tapering gradually towards the tip. Tail carriage is an important characteristic of the breed : when the dog is moving it is carried either high in a curve or in a semicircle with tip towards the loin region, which gives balance to the body, it should never be carried between the hindlegs nor curled below the backline. The hair on the tail depends on the variety and is in harmony with the body coat. In the long haired variety, the tail coat forms a plume. Tail is pendant in repose and forms a slight hook.

Colour : All colours in all possible shades and combinations are admitted, except merle colour.
Size and weight : In this breed only the weight is taken into consideration, not the height.
Weight : Ideal weight : between 1.5 and 3 kgs. Weight between 1 kg. and 1.5 kgs tolerated. Subjects weighing less than 500 gr and more than 3 kg shall be disqualified.
Faults : Any departure from the foregoing points should be considered a fault and the seriousness with which the fault should be regarded should be in exact proportion to its degree and its effect upon the health and welfare of the dog.