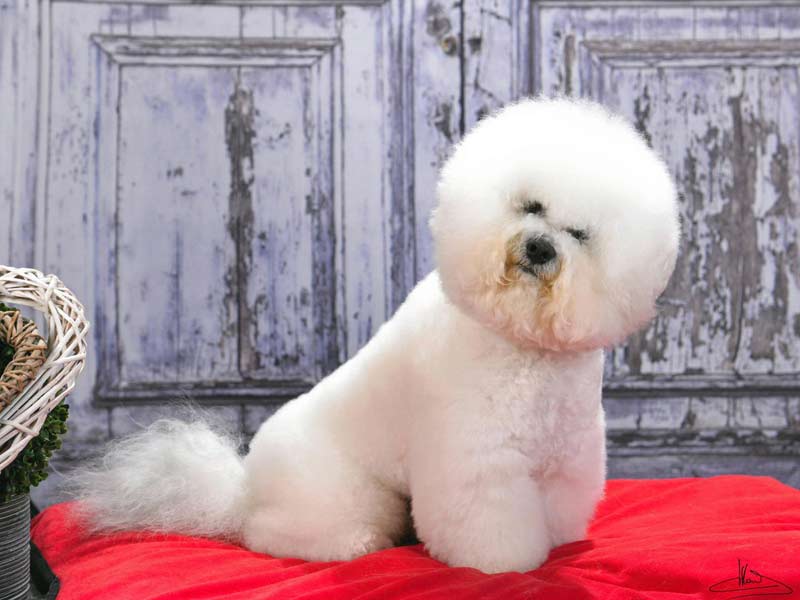 General appearace: Merry and playful little dog, with a lively gait, medium length muzzle, long very loose corkskrew-curled hair, very like the coat of the Mongolian goat. Head carriage is proud and high, the eyes dark, lively and expressive.
Head: In harmony with the body.
Cranial Region:
Skull: Rather flat to the touch although the furnishings makes it appear round. The skull longer than the muzzle.
Stop: Not much marked.
Facial Region:
Nose: The nose is rounded, black, finely grained and glossy.
Muzzle: The muzzle must not be thick nor heavy, without however being snipey. The furrow between the superciliary arches slightly visible.
Lips: The lips are fine, rather lean, less however than in the Schipperke, falling only enough so as to cover the lower lip, but never heavy nor pendulous; they are normally black up to the corner of the lips; the lower lip must not be heavy nor visible, nor slack and does not allow the mucous membranes to be seen when the mouth is closed.
Jaws/Teeth: Bite normal, i.e. the incisors of the lower jaw are placed immediately against and behind the point of the teeth in the upper jaw.
Cheeks: Flat and not very muscular.
Eyes: Dark eyes, as much as possible with dark eyelids, of a rather round shape and not almond shaped; not placed obliquely; lively, not too big, not showing any white. Neither large nor prominent as in the Griffon Bruxellois and the Pekingese; the socket must not bulge. The eyeball must not stand out too much.
Ears: Drooping, well furnished with finely curled long hairs, carried rather forward when the dog is attentive, but in such a way that the front edge touches the skull and does not stand away obliquely; the length of the cartilage must not, like in the Poodle, extend to the nose, but stops halfway of the length of the muzzle. The ears are anyway not as broad and finer than the Poodle’s.
Neck: Reach of neck is fairly long, carried high and proudly. Round and fine near the skull, broadening gradually to merge smoothly into the shoulders. Its length is approximately a third of the length of the body (proportion of 11 cm to 33 cm for a dog of 27 cm high), the points of the shoulder blades against the withers taken as basis.
Body:
Loin: Broad and well muscled, slightly arched.
Croup: Slightly rounded.
Chest: Well developed; the sternum is pronounced; the false ribs rounded and do not end abruptly, the chest having horizontally a rather great depth.
Flanks: The flanks are well tucked up at the belly; the skin is fine and not loose, giving quite a whippety appearance.
Tail: The tail is set a little more below the back line than in the Poodle. Normally the tail is carried raised and gracefully curved in line with the spine, without being rolled up; it is not docked and must not be in contact with the back; however the tail furnishings may fall onto the back.

Limbs
Forequarters:
General appearance: Seen from the front, forelegs really straight and perpendicular; fine bone.
Shoulder: The shoulder is fairly slanted, not prominent, giving the appearance of being the same length as the upper arm, about 10 cm.
Upperarm: Not standing away from the body.
Elbow: Not turned out.
Pastern: Short and straight seen from the front; very slightly oblique seen in profile.
Hindquaters:
General appearance : The pelvis is wide.
Thighs : Broad and muscular; well slanting.
Hock : Compared with the Poodle, the hock joint is more angulated.
Feet: Sinewy. Nails preferably black; it is however an ideal difficult to obtain.
Skin: The pigmentation beneath the white coat is preferably dark; the genitals are then pigmented either black, bluish or beige.
Coat
Hair : Fine, silky, very loose corkscrew curls looking like the coat (fur) of the Mongolian goat, neither flat nor corded and 7 to 10 cm long.
Grooming : The dog may be shown with the feet and muzzle slightly tidied up.
Colour : Pure white.
Size : The height at the withers should not exceed 30 cm, the small size being an element of success.
Faults : Any departure from the foregoing points should be considered a fault and the seriousness with which the fault should be regarded should be in exact proportion to its degree and its effect upon the health and welfare of the dog.